As a global leader, we’ve fallen behind.

According to the World Economic Forum, the United States is ranked No. 11 in infrastructure quality. Worse, the American Society of Civil Engineers has given America’s infrastructure a saddening D+ rating.

America’s infrastructure is the backbone of our economy. Yet analysts estimate $2 trillion in investments is needed just to be competitive again. President Trump recently announced a plan to inject $1 trillion into rebuilding our crumbling infrastructure.

It’s a massive investment. No doubt about it. But it’s just the economic kick-start our nation needs.

As a result, expect to see a record number of bridges, roadways and other major infrastructure projects being built. All of this will require a lot of materials…

The State of U.S. Steel

Today, the U.S. is the largest steel importer in the world.

The price of foreign steel is much lower than that of steel produced domestically.

One reason for this is that some foreign countries, especially China, have ramped up their steel production in recent years. With more supply, prices drop.

Since steel manufacturing requires heavy investments in mining raw iron ore, the declining price of iron made such mining activities less and less profitable. But since early 2016, iron prices reversed course and have steadily moved upward.

U.S. steel companies have also accused foreign competitors of unfair trading practices. At least 10 countries have had trade cases filed against them for helping to flood the market with “dumped” steel products from foreign producers.

So-called “dumping” by steel makers is an aggressive trade tactic where a steel exporter sells its products at a price below its cost of production or domestic market value.

There are dozens of anti-dumping laws on the books, but enforcement has been soft. But these practices are hurting U.S. steel makers now. In fact, the U.S. International Trade Commission is on record citing countries like China, Brazil, Turkey and South Africa as engaging in harmful trade practices.

President Trump wants to change that. His new infrastructure plan would pump new life into America’s steel industry. And there’s one company I believe will make an absolute killing once Trump’s plan is set in motion.

When Trump’s infrastructure bill passes, there’s one stock I highly recommend owning. Nucor Corporation (NYSE: NUE) is the largest steel manufacturer in the United States. By far, it dominates the U.S. steel market.

Like the rest of its peers, Nucor suffered through a rough patch in the past few years. But the tides have finally started to turn.

Not only are iron prices moving up, but global steel demand is increasing as well. And so far this year, Nucor has had a great start. The company’s first quarter revenues grew 30% year over year to $4.8 billion.

The sales growth is due to higher sales volume and rising prices.

Nucor shipped more than 6.5 million tons of steel to its customers last quarter, up 7% year over the year. And the average sales price per ton also rose 21% during that period.

Nucor also saw a 305.6% spike to $357 million in its earnings. And operating cash flow is in a strong uptrend. 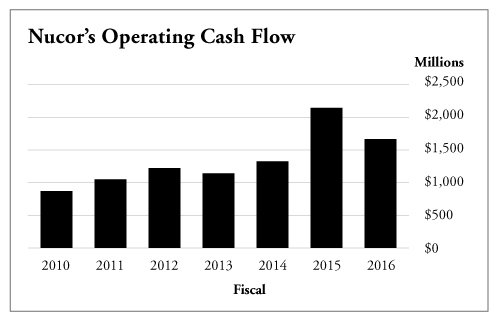 Despite the rocky times for the industry, Nucor has managed to maintain a healthy balance sheet.

Nucor’s current ratio is 2.4, and its debt-to-equity ratio stands at 52%. It also has more than $1.7 billion in cash on hand. But that cash isn’t just sitting on the sidelines. Nucor’s putting that money to work investing in and expanding its business.

Nucor’s management sees what the rest of the market is missing.

U.S. steel companies are grossly underappreciated. Steel is vital for our industrial growth. And with the political tides finally turning in favor of domestic steel makers, it’s time to invest before the herd catches on.

I believe investors can make as much as 1,133% on this opportunity.

Because that’s how much Nucor’s shares spiked during their last big run. From its 2000 low to its 2008 high, Nucor popped 1,133%. The price of iron ore – what’s used to make steel – surged over that same period. As I said before, the rising price of steel feeds right into Nucor’s bottom line… shooting share prices higher.

The time to buy is now, while the stock’s still cheap.

Action to Take: Buy Nucor Corporation (NYSE: NUE) at the market. Place a 25% trailing stop to protect your principal and profits.