We’ve said it many times before. Money equals freedom.

It’s a core part of our Triad. Without the security of wealth, a man has no Liberty.

But what about our great nation? Does she have Liberty if she doesn’t truly own her wealth?

More important… can she still provide Liberty to her people even if her wealth isn’t real?

We fear we will soon find out.

The news this week is not good. We hope it wakes a sleeping nation.

Amidst all the sensational talk of Russia and its disdain for America, the media forgot to tell the nation about some real news… how Moscow suddenly dumped 81% of its U.S. debt holdings.

Do you remember when key interest rates suddenly spiked above 3% in April? We now know we can thank Russia.

The country’s sale of billions’ worth of American debt sent ripples through the markets and the economy. Mortgage rates surged. Home prices fell. Corporate borrowing was crimped. And for the first time in more than a decade, the nation pondered the idea that borrowing costs could soon rise.

Russia’s sudden dumping of Uncle Sam’s debt – and the near-instant trouble it stirred – brings the very notion of our sovereignty into question.

If we must rely on our enemies to fund our economy, we are not truly free.

Look at the chart: 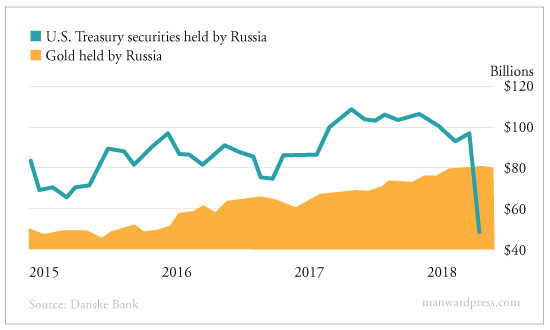 With just a few strokes of a keyboard, Russia fired what has quickly become one of the fiercest weapons in the global arsenal. It’s a bomb that has the power to inflict great pain on America and her people… without even the faintest of booms.

What’s crazy is many U.S. officials have shaken off the news. They say Russia doesn’t matter – that the country has never been a leading source of Washington’s funding.

But it’s not Russia we’re worried about. It’s the weapon that has us concerned.

As America’s debt has ballooned in recent decades, we’ve built a bomb of massive proportions… and we’ve paid our enemies handsomely to take it off our hands.

All eyes are on China, especially now that trade tensions are focusing even tighter on our lopsided trade partner.

If it retaliates against trade tensions by snubbing Uncle Sam’s debt, tariffs on imported junk would be the least of our concerns. With Beijing holding one out of every five dollars’ worth of America’s foreign-owned debt, any shenanigans from China could make funding our government a tall order.

In a word, it would be painful.

Liberty would be at risk.

We could go on about all the variables in this equation. But we fear you wouldn’t return tomorrow. It’s complex stuff.

Debt has become the weapon of choice among America’s economic rivals. With one fit of rage, our enemies could light the fuse on a bomb that could cause immense destruction and pain.

Out of all the analysts and experts we’ve heard from on the subject, perhaps it’s the words of Mark Zandi, the chief economist at Moody’s Analytics, that sum it up best…

“This is not going to end in a place that’s any better for anybody,” he said. “Maybe everyone will save face, but no good will come out of this.”

Our money is our Liberty.

And our Liberty shouldn’t be loaned out.

P.S. There’s a better way to fund our nation’s growth, and Trump is taking full advantage of it. Instead of paying our enemies’ interest… his next move could hand huge sums of money directly to American citizens. Thanks to the “1531 (b) program,” you have a shot at $7,192 in extra income each month. But time is running out. You need to make your move by October 1. Click here for all the details.