It’s a stern reminder to never let our guard down. Trouble strikes when trouble wants to strike.

We just got back from a few days at our off-the-grid cabin – where it takes a 15-minute drive just to get back to the middle of nowhere.

We warned our guests about the rattlesnakes. “Watch the woodpiles,” we said. “The snakes like the woodpiles.”

We made it through the first night without a problem. We fed the bonfire from the woodpile, and no lives were lost.

It was easy to get complacent.

“There’re no snakes around here,” we imagine our guest muttered to himself the next morning. “The woodpiles are fine.”

The next words out of his mouth weren’t quite so calm.

He reached into the pile and found what no one was looking for – a rattler coiled up and none too happy about the hand less than 18 inches away.

We let the fire burn itself out. It is August after all.

It was more proof that trouble has the keen patience to wait until we let our guard down.

It’s an idea we suspect was on a reader’s mind this week as he wrote us an interesting note.

Andy, I love what you’re doing with the Manward project. It’s needed now more than ever. Why is it that every time I turn on the TV, I see somebody shouting about why it’s so wrong to be an American man these days? We’re portrayed like buffoons. Most folks think the “War on Men” has died down because the news isn’t talking about MeToo much these days, but just this week I saw news of a taxpayer-funded study that tried to show women are “superior” doctors. What are they trying to prove… with my tax dollars? – Reader R.G.

Oh boy, R.G., you’re going to get us fired up. We’ve been on the inside of a lot of government projects. And rest assured, this is a case of somebody having some grant money to spend and no idea how to spend it. As happens so often, they picked a politically expedient topic that they knew their boss would appreciate.

But we’re not here to throw jabs at the government or pick a winner in the battle of the sexes. Claiming one sex is better than the other is dumb… and wrong. To think that’s what we’re up to with this project is quite misguided.

No, we’re here to raise men up – not because we need it, but because it’s what’s good. And we do it by focusing on the three core traits that have been proven to make us happier, healthier and more successful – our Liberty, our Know-How and our Connections.

By focusing on those three things, we don’t need to worry about how we stack up to others.

We’ll be happy, healthy and successful… and that’s all that matters.

Ignore all that politically focused noise. And turn your damned TV off!
[mw-adbox]

Hi, Andy. I want to take advantage of my Connections. I was just wondering if anyone ever asks you to look up a stock on your Liberty Indicator chart that you haven’t mentioned? I’ve been watching AKTS. – Reader K.B.

Hmmm… Normally we save such requests for subscribers of Manward Trader (where we just took a huge 300%-plus gain!), but Akoustis Technologies (AKTS) is an interesting company, so it’s worthy of a mention.

The company is quite small, and it’s working in quite a competitive space – radio frequency filters for cellphones. That means there’s big risk.

And while Akoustis says it has a superior product and a superior management team, doesn’t every small company aim to make the same claim?

Really, it comes down to what the market thinks. And in this case, the reviews are mixed. Since K.B. asked what our famed Liberty Indicator has to say, we’ll head in that direction. 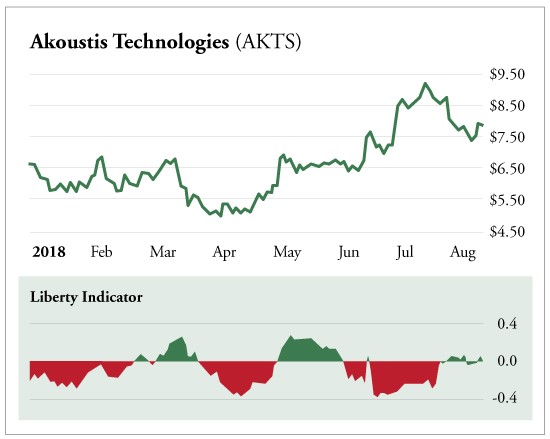 The chart tells an interesting tale. So far this year, sellers have been in charge. The red areas of our Liberty Indicator (at the bottom of the chart) outweigh the green. But what’s interesting is that when the sellers lose their grip, they lose it in a big way. Shares surge higher before giving up much of their gains.

For the speculator, this is one to watch. It has potential. But for the investor that needs to make a mortgage payment, be careful. If the buyers lose their stamina, shares could easily dip back to the $5.00 level.

If this is the sort of chart pattern and the type of investing you’re interested in, click here. We recently released a report that details 10 similar stocks… stocks that have quite the potential to surge. Click here.

Just two questions… According to what you have seen, does Facebook want data just on its subscribers, or on everybody? Even though I fear your answer is the latter, as a person who is not on/has never joined Facebook, how can I find out if my bank is revealing my data to Facebook? – Reader C.N.

You won’t like the answer to this. Yes, Facebook collects information on nonusers… and there’s no way to avoid it.

Even if you’ve never opened an account with Facebook, there’s a good chance it has your personal data stored in what’s dubbed a “shadow profile.”

There are two ways it gets your information. First, any site that uses Facebook to advertise likely has a tracking pixel hidden in the background of the site. That pixel tells Facebook the sites you use, when you visit them, etc.

Facebook also gets your IP address and location. It stores that data and uses it to serve up better ads.

The other way it gets your info is through your so-called friends. All it takes is one friend to upload their phone’s contact information (phone number, email address and maybe even address) to the site – a very common practice – and, voila, Facebook has your information.

And, again, there’s nothing you can do about it.

Even staying off the internet won’t keep the site from getting your information from a friend.

A Fresh Definition of Freedom

I came across a definition of freedom a few weeks ago that resonated with me, perhaps because so often I have not been free by this definition. It is: “A free man is one who feels no need to adjust his opinions or how he expresses them, depending on his company at the moment.”

This presumes also that his opinions are honestly his own, and not simply a tool that he uses to influence or manipulate others, as so many in politics and the media are prone to do.

The parody of this is the quote from Groucho Marx, when he said, “That’s my opinion, and if you don’t like it, I’ve got others.”

Thanks for thought-provoking essays. – Reader G.F.

Good stuff. It reminds us of an idea we recently gleaned from a great book called Everybody Lies: Big Data, New Data and What the Internet Can Tell Us About Who We Really Are. The idea is that nobody tells the truth in public… especially nowadays. But they do tell the truth to Google’s search engine.

That’s where the author realized that at the same time so many folks are telling glamorous lies about their lives on Facebook, they’re also searching for depression symptoms, divorce tips and how to spot the clues of a cheating wife.

It’s proof of what G.F. hits on above. Few men are truly free to tell the truth.

But don’t worry. We’ll keep up the fight.

We’ll tell the truth. Liberty is worth it.