How to Get Rich With Franklin’s Lost Virtue

How to Get Rich With Franklin’s Lost Virtue

We’re convinced that if we follow each of Ben Franklin’s 13 virtues, we’ll live a happy and successful life.

But, so many readers want to know, what about money? How do we get rich?

Franklin has us covered.

First, we must applaud the man for his morals and ethics when it comes to politics. Few folks know it, but Franklin worked quite hard to get a few lines added to the Constitution.

He wanted to make it illegal for politicians to get paid.

Public servants working in a democracy, he said, should not do it for the money.

Obviously, his attempts failed. Politicians are paid handsomely. But as we learned by studying his virtues, the man did his best to do what was right, no matter the law.

That’s why he did something spectacular with his money.

From 1785 to 1788, Franklin was the governor of Pennsylvania. It was a well-paying job… but it wasn’t money that he wanted. So he set it aside.

He turned it into millions of dollars.

In 1775, a popular Frenchman mocked Franklin’s famed Poor Richard by creating what he believed to be a more accurate representation of an optimistic, nationalistic American.

He called him Fortunate Richard.

The character was so excited about the fate of his new country that he left a small sum of money to it in his will. Fortunate Richard mandated that it be used only after it had collected interest for 500 years.

Franklin knew a good joke when he saw one. And he knew an even better opportunity.

When the founding father died in 1790, it was revealed that he left the 2,000 pounds he saved during his term as governor to his two favorite cities, Boston and Philadelphia.

But there were some odd mandates.

The money was divided equally and could be paid out only on two specific dates.

After drawing interest for the first 100 years, $500,000 could be used for public works projects.

After another 100 years, the cities could do what they pleased with the money.

But Franklin didn’t just want the money sitting around in some bank account. He wanted it to go into the city and put young men to work. After all, it was a small apprenticeship loan from two friends that Franklin was convinced served as the foundation for his fortune.

Here’s how Franklin laid out his demand:

The Trustees shall… let out the sum upon interest, at five percent, per annum, to such young married artificers, under the age of twenty-five years, as have served an apprenticeship in the said town, and faithfully fulfilled the duties required in their indentures, so as to obtain a good moral character from at least two respectable citizens, who are willing to become their sureties, in a bond with the applicants, for the repayment of the moneys so lent, with interest, according to the terms hereinafter prescribed…

The idea paid off. Not only did hundreds of folks get a head start in life thanks to Franklin’s money… but the town made off quite handsomely.

At the end of the first 100-year period, Boston had $391,000 in its coffers. As instructed, it used much of the money for public works… like starting the Franklin Union, a technical school. And, of course, it continued to loan the money to budding entrepreneurs.

Even after spending much of the funds, the remainder continued to collect hefty interest.

In 1990, at the end of the second century, Boston’s endowment was worth more than $5 million. Philadelphia’s (which was tapped for many more public works projects) was worth roughly half that.

The Value of Tomorrow

The lessons here are obvious.

First, we wish more politicians would follow this path. We’d have a richer country… not richer political dynasties.

But more important, Franklin’s act exemplifies the value of our choices today.

Franklin could have rewarded himself with any number of material things. He could have taken his 2,000 pounds and spent it on something flashy and bold.

These days, he’d tell himself “you only live once” and then head down to the local car dealer.

But we know Franklin better than that.

He understood that money has some value today… but it has immensely more value tomorrow.

Perhaps you don’t want to gift a future fortune to Philadelphia (we certainly don’t blame you). But Franklin’s act begs us to understand the true cost of money.

Every dollar we spend today is a few dollars that we can’t spend tomorrow. It’s simple, yet it’s the oh-so-powerful math that keeps so many folks from the future they deserve.

It leads us to vehemently disagree with one of Franklin’s boldest and most famous proclamations.

“A penny saved is a penny earned,” he said.

But Franklin was wrong.

A penny saved is a dollar earned.

If you want to get rich, stop wasting money today.

P.S. A new Trump-sponsored initiative is helping everyday Americans collect checks that range anywhere from $872 to $10,757. And they’re collecting these payouts every single month!

Once you get all the details, I think you’ll be kicking yourself for not getting involved sooner. Because, as you’ll see, when it comes to the size of these payouts… the sky is the limit. 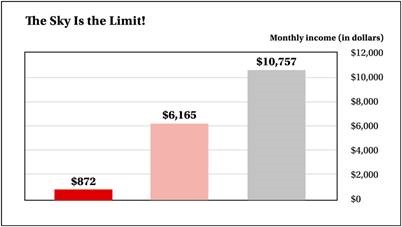